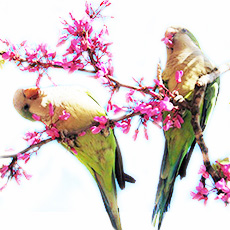 Spring is one of the four conventional temperate seasons, following winter and preceding summer. In some cultures in the Northern Hemisphere (e.g. Poland), the astronomical vernal equinox (varying between 19 and 21 March) is taken to mark the first day of spring, and the summer solstice (around 21 June) is taken as the first day of summer. In Persian culture the first day of spring is the first day of the first month (called Farvardin) which begins on 20 or 21 March. In other traditions, the equinox is taken as mid-spring. In the traditional Chinese calendar, the „spring” season (春) consists of the end of winter (from 4 February) and beginning of spring (to 5 May), roughly taking the equinox as its midpoint. Similarly, according to the Celtic tradition, which is based solely on daylight and the strength of the noon sun, spring begins in early February (near Imbolc or Candlemas) and continues until early May (Beltane).