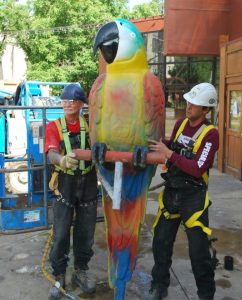 International Workers’ Day, also known as Labour Day in some countries, is a celebration of labourers and the working classes. In Poland, since the fall of communism, 1 May is officially celebrated as May Day, but is commonly called Labour Day. It is currently celebrated without a specific connotation, and as such it is May Day. However, due to historical connotations, most of the celebrations are focused around Labour Day festivities. It is customary for labour activists to organize parades in cities and towns across Poland. The holiday is also commonly referred to as „Labour Day” („Święto Pracy”).

In Poland, May Day is closely followed by May 3rd Constitution Day. These two dates combined often result in a long weekend called „Majówka”. People often travel, and „Majówka” is unofficially considered the start of barbecuing season in Poland. Between these two, on 2 May, there is a patriotic holiday, the Day of Polish Flag (Dzień Flagi Rzeczypospolitej Polskiej), introduced by a Parliamentary Act of 20 February 2004.